Which is not a suprise. I was however pleasently surprised how many people voted for me when posting to my social groups. I mean 15 isn't much, but it's a lot more than what I was expecting :)

So anyway what are the stats?

So on PH launch day there were 329 visitors. Next day a bit less. Those days actually include the HN launch I did in the same evening since the DB was beefed up anyway and no tmuch traffic was happening. HN resulted in 0.

The most popular page besides landing was /price and then /examples. The least popular were /roadmap, /usecases and /about. I probably spent too much time on those.

The stats show 18 registered users, but 7 of those are either spam or myself. So 11. Not the worst, but there are no active users since launch - and that's the important bit.

Marketing. I'll go into feature avoiding mode and only implement something if:

I'm a noob. But I have some ideas.

That's it! Yeah it's not much I know. But it's a marathon, not a sprint. New ideas will arise, old ones will fall. A few actions will prove more beneficial than others. Just keep moving.

During the three month bashing out of Bashboard - I learned some things. And had a few ideas. I want to try them out. It'll only take a few weeks, I promise! :D

But actually yes, this blog has some attention from the internet, I want to try and use it. Also Sales Safari has been a mind blower. Definitely want to go in and find some watering holes of the internet that I could perhaps serve.

We all know that people use ad blockers and thus you probably have more visitors than the numbers show (solution: custom fetch request or server side analytics). Well today I found out Google Analytics with all it's amazing power isn't doing much to mitigate 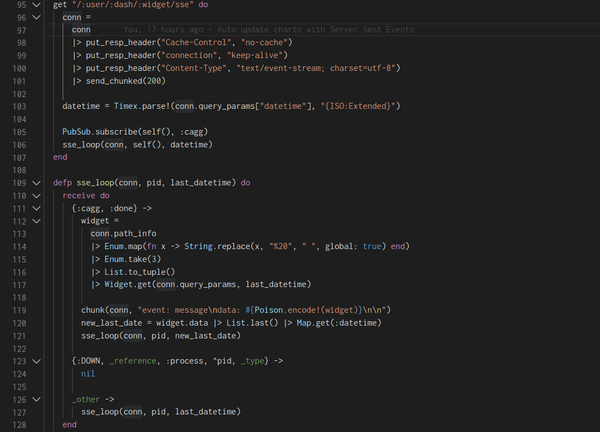 SSE is old, but not a lot of Elixir materials out there. Took me 3 days to get this working, so congrats for finding this :) This is not a tutorial,