So I was writing a blog for Rangeforce and was looking for a markdown editor. From the depths of Arch Linuxes application repository came Abricotine (the name is the only thing I don't like). As soon as I opened my document I realized the author of this app had really made an effort.

Why is it so good? Let's start with the obvious

...is awesome. I suppose it's something only a tech person would understand. Too bad though, because markdown has so many benefits:

When I discovered markdown I had the typical "this is definitely the future, there is no way around it. Hear the word puny people, see the future!" moment. Today I'm not optimistic at all about it taking over the world. Though I think it would make things easier.

Oh my god I love my text while writing...

It just looks good. It doesn't remove any markdown, but formats it in a way I can comprehend so well. It's markdown with a preview in one, but done right. This has been tried before, haven't seen it done well until now.

There is also an export HTML feature, but that looks like dog puke. Don't even try it.

Once you try Sublime you can't shake off the notion that it's features should be in every editor ever. Shit like multicursor support:

And surrounding selection with brackets or quotes:

This stuff is just mandatory wherever you write and Abricotine has it all!

Not impressed? Is it really just developers that believe in shortcuts? How about a handy shortcut for tables? 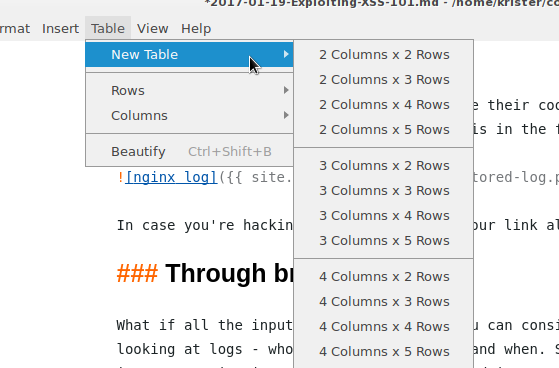 No? Well then you're not a Markdown person and we'll just have to accept our differences.

Over the top sexy checkbox editing!

Okay whatever, I'm done. I get that Markdown isn't for everyone, but if it is this is the best editor I've seen in a long time.

I get annoyed when there's a discussion and it's clearly just people talking about different things. The annoying part comes in when there's me acknowledging it, but unable to understand what it is we're misunderstanding about each others vocabulary. Or when we're working on

I've been doing this for about a month now. Not every day, like I had aimed, but every other day, which is also fine. There were many goals: Fun - writing is just fun. Profit - testing out keywords to get markdownsites.com traffic.